Posted by Lucas Oickle on Monday, May 4, 2015
Playtonic Games' Yooka-Laylee:
Full orchestral soundtrack, or MIDI?
- - - - -
Like any 20-something who played Rareware's Banjo Kazooie as a child, I have been watching with unbridled excitement as the Kickstarter for Playtonic Games' debut project Yooka-Laylee reached over 6 times it's initial crowdfunding goal in just a little over a day (it reached the initial goal in just 40 minutes).

...and it's still growing: https://www.kickstarter.com/projects/playtonic/yooka-laylee-a-3d-platformer-rare-vival

Now, with the latest stretch goal of 1,500,000 British pounds, a fully orchestrated soundtrack by composers GRANT KIRKHOPE (Banjo Kazooie, DK64, Perfect Dark, etc.) and DAVID WISE (Diddy Kong Racing, & others which I don't know personally because regretfully I only had N64 as a kid!) is in the foreseeable future.

However, I was shocked to see a slew of comments opposed to live orchestra in favour of MIDI! I had to think about this; why advocate for a drastically inferior quality of sound?

Some are openly anti-orchestra; others just very strongly in favour of midi. Sure, there are plenty in favour of the orchestral score as well, but I was just amazed that there was a considerable audience at all in favour of electronic samples over professional instrumentalists. Though, to be honest, I love MIDI too - so what is behind these opinions?


Some of the more compromising are asking that, if it is done with full orchestra, the player actually be given the option of switching back to midi:


As a music major (M.Mus., composition! Is that good for anything??), comments like these were the most disconcerting:

I had never even considered that an orchestral sound could be made out to be something so undesirable as that last tweet seems to suggest. But, after some thought, I think I came to an understanding, at least somewhat, as to why people like @jordanmadick might be making some comments like that one.

Like I said, honestly, I love MIDI too. I started composing using NWC (Noteworthy Composer) by grabbing stray midi files from the endless expanse of the internet, feeding them through NWC, looking at them / studying them and then rearranging them for myself or for friends in high school band. I do sincerely love the sound of old, limited, primitive MIDI, and I think there are quite a few people in and around my age bracket who all agree - all of us in particular who grew up with video game consoles like the N64 or prior think MIDI is a viable instrumental sound all on its own. I think it's more than nostalgia; there is just something to be appreciated about the limitation, about the basic, inferior quality of the MIDI sound which is in and of itself charming & altogether effective.

But I think this is the wrong way to go about things.

Should Kirkhope and Wise be restricted as video game composers to MIDI? I really do love MIDI, but as a young aspiring composer I would never wish that on anyone! Banjo Kazooie had the sounds it did because of the time it was made; that was the state of the technology of the time, and Kirkhope created an iconic soundtrack which 15 years later I'm still not tired of. But, when they did Nuts and Bolts, did they restrict themselves to the technology & sounds of the past? Of course not. In fact, in my opinion Nuts and Bolts was an appropriate sequel because they intentionally avoided trying to recreate the same game; a new BK platformer could never be as successful or as good as the original... at least in my opinion. (Tooie is the prime example here: I played it, I liked it, but now when I think back it's only really the original BK which has stayed in my mind and which I love replaying over and over).

As a general rule, I think sequels are practically impossible to pull off well; usually it seems like they're just being done for money. (For instance, the upcoming new Star Wars film: will they ruin it? Who knows, but obviously I have no choice but to go see it, right? ...right?) So then, why stick with MIDI? Why try to recreate the past? Hearing things like Gerudo Valley in the LoZ OoT 25th anniversary special orchestra CD for the first time blew me away: It was a combination of nostalgia and the incomparable feeling of having an old MIDI track which you dearly loved and listened to on repeat suddenly hashed out by a swarm of professional musicians all working in tandem as a total orchestral force. It was innovation; it was the ultimate nostalgic remix. I experience a similar feeling listening to Kirkhope's BK lair theme re-orchestrated for Nuts & Bolts: "Grunty's Challenge" This encapsulates the awesome advance of recording technology & the sound design capabilities of games: We can still love & respect MIDI while embracing the new capabilities of today.

So, for Yooka-Laylee: MIDI or live orchestra? The capabilities of today are for fully symphonic video game soundtracks - so if Playtonic can crowd fund 1.5 million pounds, why not a full orchestra for the extremely capable Kirkhope & Wise? People like me will still always love the midi of N64 titles, but I don't want that anymore for contemporary games: video game soundtracks should be on an even playing field with film composition. They're both art forms, and they're both comprised of all kinds of incredibly skilled composers. We should embrace the possibility of Yooka-Laylee's composers being given the opportunity to flesh out their scores with the incredible resources that only a full orchestra stacked with pro players can provide.

In 100 or 200 years, who knows, maybe even a stereo live orchestra video game soundtrack will sound charmingly archaic. Maybe the future of video game soundtracks will be 8 or 16 channel interactive sound? Maybe everyone will play video games in rooms encased with speakers on the ceiling and on each wall ...and embedded in the floor? (...the new rumble pack...?) Who knows, but sound design will continue to evolve.

But whatever the advances, there is no reason to be advocating against an orchestral score for Yooka-Laylee. Go check out your local orchestra or listen to something like Shostakovich 5 on Youtube; orchestras have more to offer than you think! 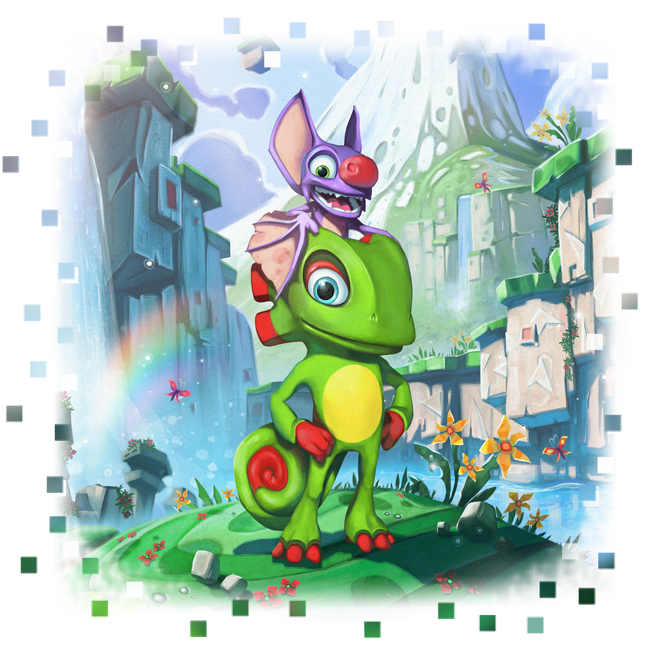