Posted by Lucas Oickle on Tuesday, January 6, 2015
Vancouver Pro Musica's flagship event, the annual Sonic Boom Festival (a critical recurring aspect of the Vancouver new music scene) is happening this year from March 25th to 29th. One of the exciting groups performing this year is the relatively newly formed Piano Erhu Project (PEP) who will be playing as part of the March 28th concert.

The concert is scheduled for Saturday, 28 March 2015, 7.30pm at Pyatt Hall, 843 Seymour St, Vancouver. The PEP portion of the concert includes the following 3 contemporary pieces by Vancouver-based composers, including my own Firewall: Qinglin Bruce Bai - Everyone has a Fantasy Lucas Oickle - Firewall Angelique Po - Poem

Nicole Ge Li is currently Concert Master of the B.C. Chinese Orchestra and gaohu soloist with the BC Chinese Music Ensemble.

Li began learning the erhu at the early age of six and started training professionally at the age of 11 at the Wu Conservatory of Music Affiliated Secondary School, where she received a full scholarship for four consecutive years. Li was later admitted to the prestigious Shanghai Conservatory of Music, where she earned her Bachelor of Music degree in erhu performance in 2008.

An active erhu performer, both as a solo artist and as a member of an ensemble, since 2000, Li is a much sought after performing artist in Vancouver. In 2011, she organized and performed in her own erhu recital in Vancouver, which was also the first full-scale erhu performance event of its kind held in Canada. In 2013, she was invited to perform for Prime Minister Stephen Harper as the only Chinese instrumental soloist at the Chinese New Year Gala in Vancouver. Later that year, Li performed the celebrated erhu concerto “Butterfly Lovers” with the BC Chinese Orchestra. During this 2013/14 season, Li is collaborating with virtuoso pianist Corey Hamm in bringing the first of many world premieres of new works for erhu and piano by Chinese and Canadian composers. These performances are being supported by a Canadian Art Council grant as part of a cross-cultural music exchange project.

As a performing artist, Li is known for her interpretive expressiveness, stylistic versatility and ability to transverse a wide range of musical genres from the East to the West, from the traditional to the avant garde. As a teacher, Li is known for her ability to inspire students to excel, as evidenced by all her students’ successful exam results.

Li works out of her, JW Musical Studio, in Richmond, BC where she teaches, rehearses and records her growing erhu repertoire.

Dr. Corey Hamm has commissioned, premiered and recorded over 200 solo, chamber and concerto works from composers from all over the world.

His CD of Frederic Rzewski’s hour-long solo piano epic The People United Will Never Be Defeated! (Redshift Records) was nominated for Best Classical Recording at the Western Canadian Music Awards, and Rzewski himself said it was “Excellent! Maybe the best recording!”. He also has a new CD, Beyond Shadows (Redshift Records), with his ensemble The Nu:BC Collective, plus a soon-to-be-released CD of solo works written for him by Hamel, Morlock, Nobles, Chang, and Godin, and a CD of the music of Jocelyn Morlock on Naxos.

Corey is also part of an exciting duo with erhu virtuoso Nicole Li, PEP (Piano and Erhu Project), they have three CD volumes of over forty new works for piano and erhu written for them coming out in 2014/15 (Redshift Records). PEP will be touring China in 2015.

Corey was soloist in the World Premiere of Jordan Nobles’ Piano Concerto with Bramwell Tovey and the VSO, and recently performed Ravel’s Piano Concerto for the Left Hand, Faure’s Fantasie, and Gershwin’s Rhapsody in Blue.

Hamm is in demand as an adjudicator and teacher in Asia, and North America. He is Associate Professor of Piano and Chamber Music at the University of British Columbia in Vancouver, Canada, where he received the Killam Teaching Award for Excellence in Teaching. There, he also Co-Directs the Contemporary Players. He is on the Piano Faculty of the Summer Institute for Contemporary Performance Practice at the New England Conservatory of Music in Boston. His beloved teachers include Lydia Artymiw, Marek Jablonski, Stéphane Lemelin, Ernesto Lejano, and Thelma Johannes O’Neill. 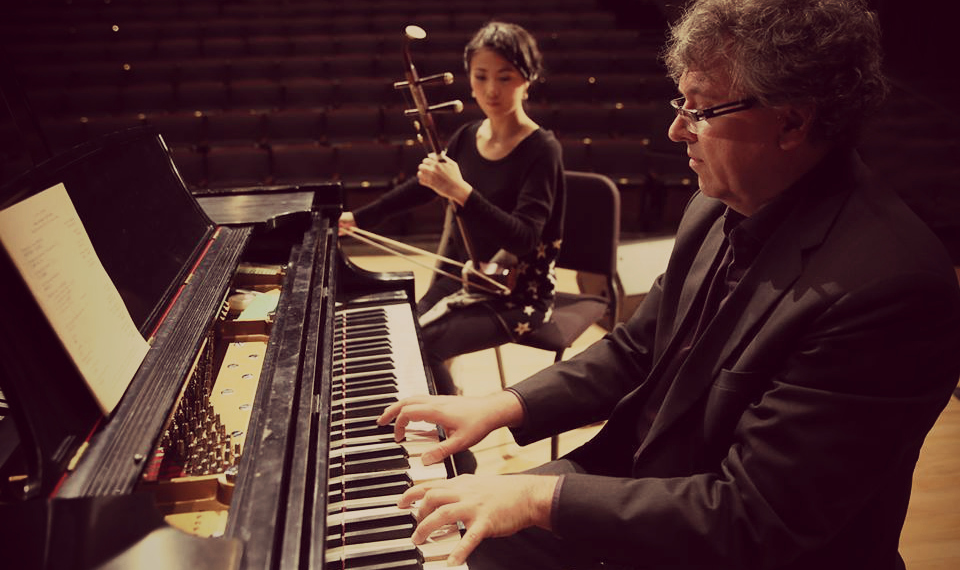 Photo: Music on Main via the Georgia Strait (as far as I can tell...)